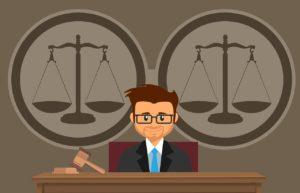 Judges. Ultimately, when it comes down to it, it is judges who enforce contracts. This is why it is important to involve a contract negotiation lawyer when drafting and negotiating your contract. The reason why we enter into contracts is to make sure that we have certain rights in a relationship. I enter into a contract with my home builder to make sure he does the work he promised and contractor wants to make sure he gets paid for his work. We also have other terms about professionalism, timelines, and remedies if things go sour. But at the end of the day, neither party can make the other party do anything. If I don’t pay, the contractor can not steal money from my purse or force my bank to turn over the money. So the contractor has to go to court to get his money.

This is how contracts get enforced. The parties must go to court. In this case, the contractor may sue me for the money he believes I owe. However, I can also present my defenses such as the contractor not completing the job or doing very poor quality work. At this point, the judge will determine which terms are enforceable and how much the contractor is owed. In this case, the judge determines that I should pay 25% of what the contractor claims but agrees with me that the contractor’s work was terrible so I should not have to pay the remaining 75%. The court will then order me to pay the 25% with a written ‘order.’ At this point, I can pay voluntarily or the contractor can enforce his right of payment by sending the Order to my bank where the bank must turn over the funds. The contractor can also send the Order to my employer and the employer must turn over a certain percentage of my wages until the amount is paid off.

The above scenario is an over simplification and the process could take many months. There are many reasons why the process could take many months such as the court’s schedule being filled with other cases, the ‘discovery process’ whereby the parties can collect evidence to support their claims, and the amount of time it takes for each party to assert their defenses by writing and arguing ‘motions.’ But the stronger and more clear your contract is, the shorter time it may take to get a resolution.

How Do You Convince a Judge To Rule In Your Favor?

There are many things you can do to have a strong contract that will help convince a judge to rule in your favor. It starts at the contract negotiation process. Firstly, the contract needs to follow the law and be written clearly. When I litigate contracts, a huge problem stems from the terms being difficult to understand making it harder to judges to rule. As judges are ultimately human, sometimes the judge can do nothing more than split the difference. A contract negotiation lawyer is very helpful in these matters. The second thing you can do is to document everything in the transaction. For example, if you pay the other party, make sure you could easily retrieve a receipt so you can prove you paid later on. The same goes for documenting any communications. If you have a conversation, send a follow up email confirming the conversation and what was discussed or agreed upon. Lastly, should you end up in court, it is better to hire a contract law or civil dispute attorney. In this case, it is important to be fully honest with your attorney so she can devise the best strategy in court.